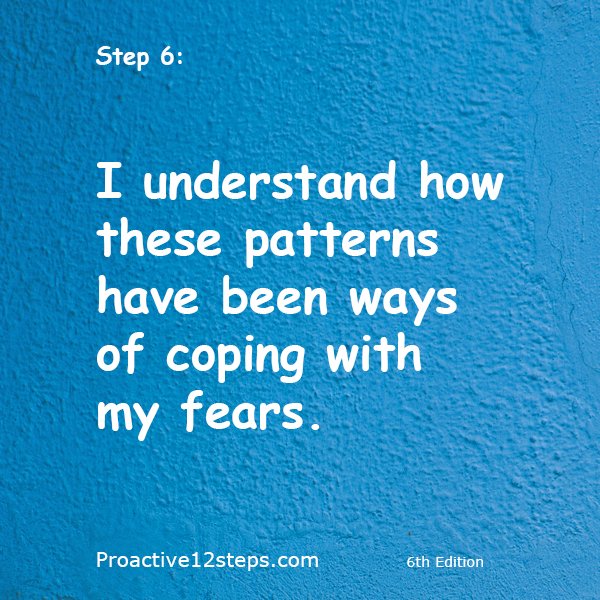 I understand how these patterns have been ways of coping with my fears.

At first glance, it might seem like Step 6 is simply a restating of Step 5. We are talking here about seeing how your patterns have been ways of coping with your fears. How is that any different from understanding the emotional logic of your behavior patterns (Step 5)?

We are talking about subtle differences. Think about what the phrase “proceeding step by step” means. You’re not rushing. You’re paying attention to the details of what you are doing. So, here, you are going deeper into the emotional logic that you started to understand in Step 5.

In Step 6, you are getting more in touch with the intensity of emotion involved in these patterns.

As you read this and think about your patterns, you may be surprised. You may not be aware of the emotional intensity in them.

Look at it this way. We are talking about behavior patterns that you seem to have no control over. You are doing things that you don’t want to be doing. What is it that makes you do it?

Emotions are what moves us to action. Sometimes, we are conscious of them. Much of the time, we are not.

It is a feature of our brain and nervous system that very intense emotions drive us to react very rapidly. We are talking about split seconds, so fast that the information has not even had time to be processed by the more mindful brain circuits.

Why is that? Our remote ancestors needed to be reactive in the face of danger to survive. Those who were over-reactive survived better than those who dawdled too much. There was little reward for those that insisted on making sure there was danger before running away from the feral beast jumping at them.

Now, in civilized life, the nature of dangers has changed, even though our brain structures have not. The situations we face in our social interactions are usually more complex than the clarity in confronting a wild beast.

Reactivity had been a necessary shortcut to our ancestors in the wild. In the civilized world, this shortcut deprives us of using the mindful brain resources that would help us respond more adequately to the kind of situations we face.

And it all happens so fast that we are not even aware that it could have been possible to act differently.

So chances are you are not aware of the intensity of feeling behind your behavior patterns. You may not even be aware that the emotion led you to react so quickly that it didn’t occur to you that you could have responded differently.

Being mindful involves slowing down the process to become aware of what happens so that it becomes possible to see the fork in the road. You cannot take it until you see it. And you cannot see it while you’re under the grip of a powerful fear when your mind is reacting to what it perceives as a severe threat.

Fear involves much more deeply rooted structures of the brain and the nervous system than thinking or acting through willpower. The more of a threat we perceive, the more we automatically revert to our most basic structures.

We cannot override the reactivity of fear through logic or willpower. When we experience a threat, our nervous system and brain bypass the more advanced, more mindful circuits. The more primitive, more reactive circuits take over for the emergency.

Overriding this natural process can only be done by calming the nervous system so that it can get enough time for the mindful brain to be engaged. Then we can process information and realize that things are not as dangerous as they first seemed to be. And so we can de-escalate the activation.

Let’s talk a bit about traumatic stress. Here’s a well-known example of how people who suffer from traumatic stress can overreact to situations. A vet, back from the battlefield, hears a loud noise. To most onlookers, it may be startling because it’s unexpected, but the shock of it dissolves quickly. Things are different for the traumatized vet. The noise triggers the sense of being in the battle zone, being shot at, or having a bomb explode nearby. To the vet, this is not just a thought or a metaphor. It is a virtual reality of the most convincing kind. The soldier, at this moment, is hijacked from present reality and re-lives the traumatic moment in all its intensity.

What it means to be triggered

Being triggered means re-living the traumatic situation of the past. You experience it as a very present reality. And you experience it in the way you did then, i.e., as somebody who does not have the resources to deal with it. You do not have access to the skills and knowledge that you may have developed since then.

So you are thoroughly disempowered. What the trigger brings back is not just a memory. When you’re triggered, you are not in the present moment. You’re experiencing what happened in the past as if it were happening now. And you only have the resources that you had then, not the skills you have acquired since. You are back in that overwhelming situation, just as overwhelmed as you once were.

So that’s what you need to understand at this stage. It is why you do these things that make no sense. If it were just about logic, you would not do them. The problem is not an absence of logic. It’s about safety versus danger.

What we’re talking about here is undoing the effects of traumatic stress. Willpower alone is not going to be enough because fear is a much, much more powerful reaction.

Trauma is very powerful, so it may very well be that you cannot adequately handle it without help. You owe it to yourself to look for the help you need. One way is to find a peer group committed to providing a safe environment for all participants. Another is to seek professional counseling. Of course, the two approaches are not mutually exclusive; you can do both.

Comparison with the traditional 12 Steps

In what way does this relate to the traditional wording of Step Six?

Step Six of AA talks about being “entirely ready to have God remove these defects.” Don’t take the wording literally. Think of it as describing a psychological process, not a miracle. That is: “It feels like I am ready for these defects to be removed.”

To feel that way, you have to understand how these so-called defects are an attempt to cope with something that feels overwhelming. It is then possible for you to replace them with something else that fulfills the same function but works better and has fewer side effects.