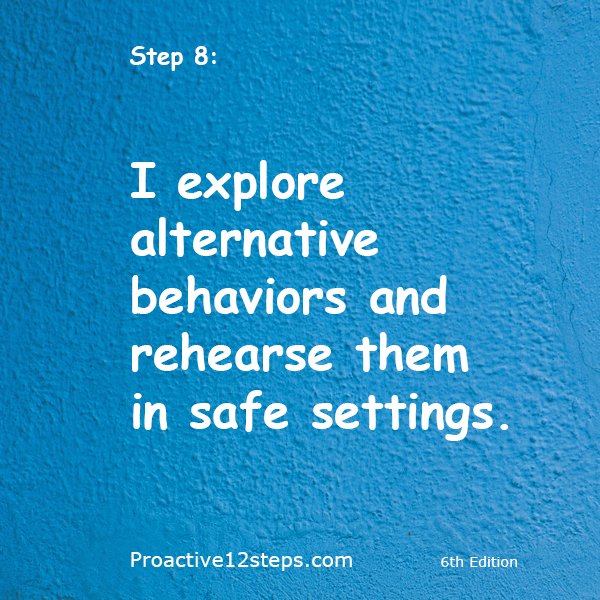 I explore alternative behaviors and rehearse them in safe settings.

Here we are very much in the thick of the step-by-step approach to changing dysfunctional behavior patterns. By now, you have much more understanding of why it’s not a “Just Do It” attitude. We are talking about behaviors that have risen to cope with something overwhelming.

“Overwhelming” is something you feel at a gut level. To make changes that are effective and sustainable, you have to go slowly. It makes it possible to address the problem that caused the avoidance and coping behavior.

So, in this step, you are not yet making changes in real life. You are exploring and practicing possible changes in the privacy of your mind. That is, not with the intensity that is involved in interacting with others.

Baby steps are not just for babies

You might think that this is too much of a baby step. Well, it helps if you put it in perspective. Just look, for instance, at boxers. Practice in boxing is not limited to fighting. It involves using a punching ball. You also practice improving your form.

In martial arts, judo, karate, Aiki-Do, people spend a lot of time learning the movements slowly and deliberately. They practice the form in addition to doing practice fights. And all of this practice is not just for beginners. Even highly advanced martial artists do that.

There is something similar in golf. You visualize the movement. You practice it when you are not playing golf, i.e., when there is no pressure. Practice helps you learn better.

Let’s take a simple example. Let’s say that the behavior pattern you want to change happens at work when people interrupt what you’re doing to ask you to do something for them.

As we have seen in Step 3, there are two components to every situation you’re in. There is the situation itself, and there is what it triggers in you. Taking a pause allows you to pay attention to the two components.

You take a pause and reflect. The situation is the interruption, other people asking for something. The other component is how you respond. Your knee-jerk reaction is to reflexively say yes. Now, this has a cost to you: you end up being overextended. It also has consequences for other people. As you take on more than you can handle, you don’t deliver on some of your promises. You get impatient and resentful, which doesn’t make it pleasant to work with you.

In Steps 5, 6, and 7, you have paid attention to the emotional logic of what you are doing. You have a sense of the level of pressure and fear that it brings up for you. So you understand why your automatic answers are what they are. And now, in Step 8, you are brainstorming some ways in which you can respond to people differently.

To do this, you look back at past situations. What happened today? Last week? What other moments do you remember? In Step 8, you look at them to see how you could have done something differently.

Do you have a minute?

Let’s take an example, an interaction with a colleague at work, let’s call him Tom. He popped into your office, or your cubicle, and said: “Do you have a minute?” Reflexively, you said yes. But you did not have a minute. You were in the middle of something.

When you listened to Tom explain whatever he wanted to tell you, you were in a state of inner frenzy, all tied up in knots because you could not hear him. You were still thinking about what you needed to do for yourself. You were between two chairs, neither in one nor in the other.

In the brainstorming part, you rewind the imaginary video to the moment when Tom said: “Do you have a minute?” And you then imagine yourself raising your head slowly, facing him, and saying: “No, actually, Tom, sorry, I don’t have a minute right now. Maybe we could talk about it later this afternoon. Would 3 o’clock work for you?”

You are not reflexively saying yes. You are not saying no either. You’re finding a way to be respectful of your needs as well as the needs of the other person.

Now, this will seem obvious to people who don’t have a problem with managing interactions. But if you have this problem, it may feel hard even without the pressure of the actual encounter with Tom. It brings up the sense that you don’t have the right to say no. You believe that you should be available whenever people want you to be.

The practice consists of challenging this belief. However hard it is to do it in a practice session, it will be less hard than to do it when you’re not in the heat of the action.

I want to emphasize that you are not looking for magic words. The goal here is to confront your dysfunctional beliefs. I wanted to give you an example of dealing with it in a rehearsal mode.

As you practice, pay attention to the feelings that go with saying something as simple as: “No, Tom, actually, sorry, I don’t have time right now” and notice how it feels inside, what your breathing is, what your tensions are, how stressed your voice might be.

Chances are, even in a rehearsal situation, if something is emotionally difficult for you, you’re going to feel stress. The idea is not to hide it. It’s not to pretend you’re not rehearsing to play a role. If you notice tension, that’s great. Embrace it. The stress tells you that there is more emotional work to be done. It means that you’re not ready for prime time, which is OK. It means that you still have more exploring to do, and that’s OK.

The point here is you’re not trying to fake it, to pretend it’s easy for you. You are exploring patterns in situations where you have difficulties, so it is not easy to change. You are doing this exploration for yourself, not to impress other people. Figuring out where the problem is will help you find a way to address what is difficult. Again, the idea is not to look to others as if you were relaxed about it. It is to figure out what makes you tense and stressed out, so you can deal with that adequately. And that’s why you’re going, slowly, step-by-step.

What about the people you have harmed?

The original Step 8 of A.A. advises you to make a list of all the people you have harmed and become willing to make amends to them all. In the Proactive Twelve Steps, Step 8 is more comprehensive. You don’t just prepare to apologize. You figure out a way to avoid hurting people in the future. Of course, you will apologize to people you have hurt. Your intention to apologize is much more meaningful now that you have thought about how not to hurt them.