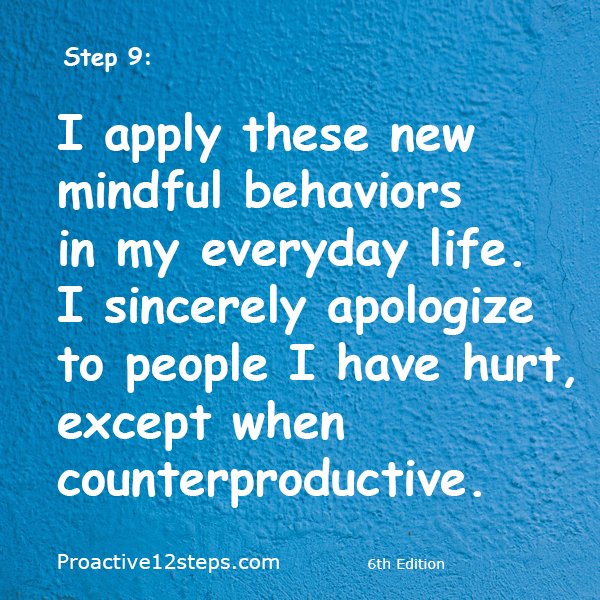 I apply these new mindful behaviors in my everyday life. I sincerely apologize to people I have hurt, except when counterproductive.

So far, we have been emphasizing a sense of going slowly, step-by-step, to better deal with what is blocking you from doing what you want to do. But eventually, there comes the point where the rubber meets the road. You put into practice what you have been preparing for.

The key here is to stay mindful

It’s not an either-or proposition. It’s not either you change your behavior, or you are mindful. It’s both. If you only focus on your conduct, it may happen in a blur, as you are forcing yourself to do what you believe you should be doing. You will likely be tense, not quite emotionally present as you’re doing it. This kind of change will not be lasting, and it’s not going to be satisfying. You’re adding stress and pressure to your life. In some way or another, it’s going contribute to your level of general and happiness and lead you to act out. So, it’s no good.

Applying things in real life does not mean forcing yourself to look from the outside as if you’re doing it. It means being present, mindful, grounded in doing it.

Since we’re talking about changes that have to do with coping mechanisms, these changes will be difficult. The changes will not be smooth, and you’re not going to feel comfortable about that.

So if you expect that it should be smooth, you’re going to be disappointed. I want to recalibrate your expectations so that you’re realistic. You’re going to be noticing all kinds of turbulence inside. And that is good.

Conversely, if you expect that it all flows naturally and effortlessly, you’re going to be disappointed. You might disconnect from your feelings to not notice how stressful it is to apply these new behaviors in real life.

I want to emphasize that the behaviors we are talking about are coping mechanisms because situations that trigger them are very stressful. As a result, you bypass the difficulty and go to a default mode. The bypass is related to the intensity of the stress that is generated by the situation.

It hardly matters how much you have rehearsed alternative behaviors. When it comes time to implement them in real life, you’re back into the stress of the situation. And so it would be astonishing if it went smoothly. I would like you to be ready for that.

Remember that it’s going to be emotionally challenging to make these changes. You’re going to have a hard time trying to be emotionally present and mindful as you try to behave differently. So you need to engage your curiosity toward noticing how not present you are, how stressed you are, how difficult it feels. The turmoil is not strange. It is the lack of discomfort that would be strange.

To make it a little more practical, let’s go back to the example we used in Step 8. We talked about somebody who has difficulty saying “no,” not just to new projects, but even saying “no” to people coming in and interrupting to talk about something. And so let’s say you’re that person.

In Step 8, you identified some ways to behave differently. For instance, say Tom comes into your office, asks if you have a minute, and you say: “Oh, sorry, Tom, I can’t do it right now, but what about this afternoon at 3?”

When you hear me say that, it feels OK. There’s no stress or pressure in my voice. But when Tom comes into your office, this is not the case. You are feeling jittery, feeling nervous, having difficulty looking at Tom in the eye. Your voice is strained. You might feel some sense of shame about it or, at least, feeling very uncomfortable. And that’s OK.

It is quite possible that you feel that your delivery sounded odd, that Tom might be looking at you in a way that implies:” What’s a matter with you?” If so, you could respond to Tom: “Hey, I know I might sound a bit incoherent here, but that’s a reflection of how busy I am right now. So that’s why I can’t give you my full attention now.”

If you think about it, you see how this awkward moment might help you make your point.

All of this is to give you an idea that the difficulties are not crazy. They are manageable. You can manage them, and you can go beyond the turmoil instead of adding further stress and pressure to a situation that already has plenty of that.

Comparison with the traditional 12 Steps

Now, I want to address how the Proactive Step 9 corresponds to and differs from the traditional wording of Step 9.

The similarity in both approaches, for Steps 4, 5, 6, 7, 8 and 9, is that we are taking a step-by-step approach to deal with the difficulties instead of sidestepping them. But there is also a significant difference.

In the traditional Steps, the focus is on misbehaving. The concept that you’re doing something wrong, you’re hurting others, and you have to eventually find a way to apologize to them, which happens in Step 9.

With the Proactive 12 Steps, we’re not limiting the nature of the change to doing something morally reprehensible and making amends for it. We’re talking about paying attention to behavior patterns that are not what you want to be doing. Then, the focus is on understanding them to find better alternatives for your own sake and others.

Obviously, to the extent that you hurt other people, you’re going to apologize to them. That is part of your learning to interact with people differently. But it’s not as narrow as in the traditional 12 steps. It’s a much broader context.

Now, you mean it

An apology that is just an apology without changing behavior is nice, but not that great. It is much better to change how you act so that the apology corresponds to a genuine change. From now on, you are going to behave differently. Not because you’re going to force yourself to, but because you’re a changed person, and you can now act differently, naturally. And so, as you apologize, it is not an empty apology, but one that is grounded in the possibility of acting differently.